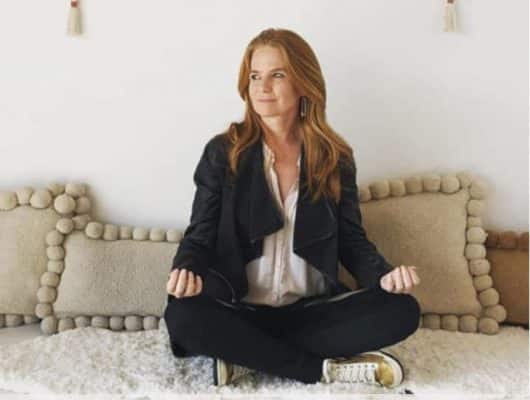 TV star Patsy Palmer, who plays Bianca Jackson on EastEnders, has stated that meditation saved her life. In the wake of the suicide of Caroline Flack [TV presenter], the UK has been in uproar about the way celebrities are treat in the media. Violent “attacks” by tabloids on stars has caused numerous celebrities to have mental heath problems. Pasty Palmer is among them.

On Monday, Patsy Palmer announced that she has been struggling with mental health problems. In a picture on Instagram she showed herself sitting in lotus position meditating with cushions and wooden wall hangings in the background. The caption Patsy Palmer wrote for the image says, “Meditation has saved my life.” She points out one of the most common problem we all deal with: a frenzied mind. “At times my mind is fast and furious,” she said. Then pointing out the delusional nature of mental phenomena, she said, “[My mind] tells me lies.”

One of the benefits of meditation is that it empowers us to see through the lies that the mind tells us. And this is precisely what meditation gave Patsy Palmer. She says that with the help of meditation she has been able to find happiness. [READ: Meditation For Happiness] “You can choose joy in any situation,” she said. “It’ll take time. It is magic. I love my practice. I’m so grateful.”

She points out the fact that the pressure from tabloids and other sources can lead to serious mental health problems. “I have been where too many do not come back from.” Whether or not she is deliberately referring to the suicide of Caroline Flack you can decide. “ One of my favorite comments Palmer makes is, “I’m grateful for asking for help…It’s a strength not a weakness.” Too many people endure mental health problems because of the stigma of admitting them. “We are all human beings,” she says. “There is no exclusivity to death we will all leave at some point. We are all one and should be helping each other not hating each other.”

Speaking of the suicide of Caroline Flack, Palmer said, “It was a reaction to people’s mindless interference into a damaged heart which they have no business in.”

In response to the Instagram post, many people asked how Palmer learned meditation. They decided that meditation may be of benefits to them too [READ: How To Start Meditating].