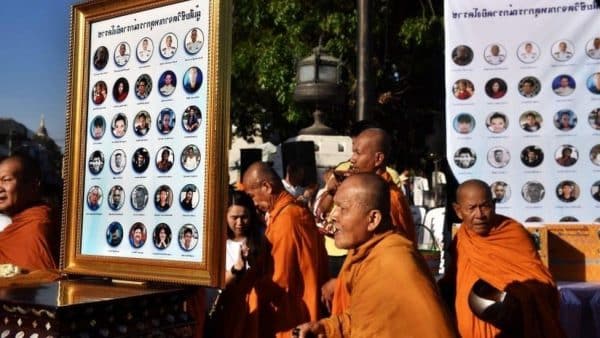 Buddhist monks led a prayer vigil for the mass shootings in Thailand that occurred earlier this month.

When the news broke of the Thailand mass shooting, the country was left in horror. It was the first time a mass shooting of this kind had ever happened in Thailand. Jakraphanth Thomma,  a 32 year-old soldier, started shooting at random bystanders in a shopping mall. 29eople were left dead.

A vigil for the victims of the mass shooting was help on Saturday and led by Buddhist monks (Theravada Buddhism is the official language of Thailand).

Public prayer ceremonies were held precisely one week after the shootings took place.  Family and friends of the 29 victims of the mass shooting took to the mall in a traditional Buddhist prayer ceremony. They held pictures of their loved ones in their hands and carried coffins from a morgue at Nakhon Ratchasima back home. One of the victims stated that he had no clue how to continue with his life as he waited to claim his son’s body. His grandchild keeps asking why he can no longer see his father, and he does not know how to explain or how to help the young child to move forward.

Buddhist monks led a traditional prayer ceremony outside the mall in honor of Peeraphat Palasan, one of the victims. Palasan had just finished his day’s work and was heading to the mall to do some shopping when Jakraphanth Thomma began shooting into moving traffic, leading to a car crash and the death of Palasan.

The ceremonies were conducted in traditional Buddhist fashion.

In a traditional Buddhist funeral, a ceremony is held at the family home or at a Buddhist temple. Prayers are given and meditations sometimes performed [READ: Meditation For Grief ].

Traditionally, the altar is decorated with candles, fruit and flowers, and incense is burnt. Verses are chanted are monks may be invited to conduct ceremonies according to Buddhist funeral traditions.