Dhyana yoga (or “dhyana meditation technique”) is the 7th limb of yoga. And it’s kind of a big deal in Buddhism and Hinduism too, as I’ll explain in just a moment.

If you’re into yoga or Buddhism, you really must learn this technique.

You may already have heard of it. It is often taught in yoga studios, although usually incorrectly.

The word Dhyana comes from Sanskrit “Dhyai” and means “to think of”. It is a practice for cultivating oneness, ultimately leading to samadhi.

What Is the Dhyana Yoga Meditation Technique?

Many yoga instructors teach you how to practice Dhyana yoga the wrong way.

We asked our Facebook fans how their yoga instructor had explained Dhyana.

Forty-three of them said they had been told that Dhyana is just another term for meditation.  This is simply wrong. There is no such thing as “just meditating”. Take a look at this guide to the best yoga meditations.

Each of those techniques is unique, and Dhyana is one of the most important of all of them.

Dhyana, the seventh limb of yoga, is a unique practice with significant benefits, and it is worth learning the method correctly. 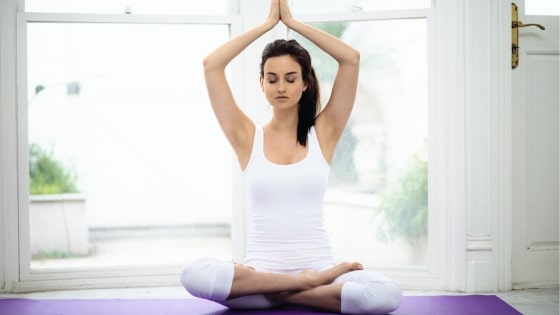 Dhyana Is The 7th limb of yoga

If you learned how to practice dhyana yoga at your studio, you probably learned it incorrectly.

The National Institute of Health [1] says:

“Unfortunately, the word is usually translated as meditation, implying a state of abiding calm. [But Dhyana requires] Yama, Niyama, Asana, Pranayama, Pratyahara, and Dharana too.”

Dhyana is The 8th Limb of Yoga.

The Eight Limbs Of Yoga come from the Sanskrit term for Ashtanga.

The Eight “Limbs” are:

The word itself means “Deeper awareness of oneness”. It is a profound meditation technique.

When we practice dhyana yoga, we train the mind to perceive ourselves and the world as one.

In Dhyana meditation, the meditator is aware of only two things:

This is different to more common meditation techniques, like Samatha / Dharana, which are focused meditations.

In focused meditation, at least one of the five senses is always involved.

In proper Dhyana yoga practise, no senses are involved.

Dhyana is when the centre of consciousness focuses on the object of meditation. There is no distinction between the object and the meditator. They are one.

And that is one way in which yoga teachers teach the wrong way. They explain it like Samatha / Dharana, when it is, in fact, quite different.

Kirsty Tomlinson on Ekhart Yoga, explains it like this:

“While Dharana requires us to concentrate on one object, Dhyana teaches us to observe it without judgement, without attachment – instead, contemplating it in all its colours and forms in a profound, abstract state of meditation.” [3].

There’s heated debate about the origins of the technique, which is the 7th limb of yoga.

Some believe that Dhyana yoga is a practice that was founded alongside Buddhist mindfulness. Others argue that it was first mentioned in the Hindu text the Upanishads.

In the Upanishads, Lord Krishna advises Arjuna to “fulfil his Kshatriya (warrior) duty as a warrior and establish Dharma”.

This moment in the Upanishads led to the development of Hindu dharma. Many historians believe it was in this conversation between Prince Arjuna and Lord Krishna that Dhyana was first mentioned. In that dialogue, Dhyana is a synthesis of other Hindu and Yogic practices.

That’s one reason it is so important. It’s one of the central hub spots, or joining points, between yoga, Hinduism, and Buddhism. And if all three of those religions advocate practising Dhyana yoga, it is an incredibly valuable technique to know.

In the yoga sutra, meditation is described as a way to interrupt the fluctuations of the mind.

How To Do Dhyana Yoga Meditation

If you want to understand Dhyana yoga, you first have to recognise why it is unique.

Other meditation techniques are about focus. Specifically, there are focused attention and open monitoring meditations.

In focused meditations, we use at least one of the five senses. In Dhyana, there is no use of the senses.

In Dhyana yoga practice, the mind is focused on the object of meditation. This is done principally through Japa (recitation of mantras) and Prarthana (prayer), though the exact practice varies between different forms of yoga as well as in Buddhism and Hinduism.

Many non-Hindus and non-Buddhists do not like to recite mantras. Thankfully, mantras and Prarthana are optional, and there are more modern ways to practice.

Dhyana yoga is also different to focused meditations because it is pure.

When we exist in Dhyana, we are not judging or even aware of the possibility of judging, and we are not aware of the distinction between the self and the external world. We are one. It is a place beyond words, which is explained by the Lao Tzu quote: “He who knows does not speak”.

Dhyana yoga leads us beyond likes, dislikes and sanskaras (imprints left on the mind).

We step out of Jadasamadhi (dreamlike state), let go of consciousness and self, and exist as pure Atma (higher self). In this state, we achieve oneness with the meditation object, a harmony based on complete love.

This is dhyana yoga: oneness centred on loving devotion.

Before trying the method below, I recommend that you:

Dhyana is not for beginners. And even though many of us have been practising yoga for years, we may still not have a lot of experience meditating. So, read those two guides above.

This technique aims to cultivate a loving oneness.

By removing the second point (thoughts and feelings), we put consciousness in direct contact with the object of meditation.

This is Dhyana meditation: direct oneness with the object of meditation.

When practising, we are not aware of the fact that we are meditating, we are only aware of our consciousness and the object of meditation.

In his book Moving Inward: The Journey to Meditation, Rolf Sovik [President and Spiritual Director of the Himalayan Institute].explains that Dhyana is “proper meditation” and that it is only possible after extensive practise of Dharana.

Sovik explains that it is not effortful meditation but pure existence.

As you practice Dharana or Samatha (meditation focusing on an object), you will gradually quiet the mind and move towards oneness. At first, you may experience just a few seconds of Dhyana, but this time will increase the more you practice.

To go further in the technique, aim to stop trying to meditate and aim for effortless oneness with the meditation object. This will bring Dhyana faster and for more extended periods.

It is impossible to force Dhyana. Instead, it is a natural evolution of Dharana and will come through prolonged practice. That practice will be extremely fruitful. Once we achieve the state for an extended time, we find great insight into the nature of ourselves and of our existence.

What To Do Next

Guest what comes after the 7th limb of yoga…? The 8th (sorry).

Here’s what to do next:

The Differences Between Hindu, Buddhist, And Yogic Dhyana Meditation.

There are slight differences between Hindu Dhyana, Yoga Dhyana, and Buddhist Dhyana.

“Seated comfortably in a seat neither high nor low, keeping the hands near the body unmoved, control the eye from wandering outwards (fix the gaze on the top of the nose). Control the breath by taking it through one nostril and letting it out through the other and vice versa. Control the senses. Pronounce the letter OM continuously and with deep devotion both while inhaling and exhaling.

In Buddhism, Dhyana is “no-mind”. It is a state of complete equanimity and awareness.

In Buddhism, Dhyāna (Sanskrit) or Jhāna (Pali) is a series of cultivated states of mind, which lead to a “state of perfect equanimity and awareness (upekkhii-sati-piirisuddhl).” It is commonly translated as meditation and is also used in Hinduism and Jainism.

In yoga, Dhyana is complete, pure-minded meditation in which we are not aware that we are meditating. We are one with the object of meditation. And it is a oneness beyond thought and effort.

You Have Already Experienced Dhyana Meditation

There are many times in life when you will already have felt a state similar to Dhyana. It is that feeling of what Buddhists call oneness. If you’re a parent, for instance, I’m sure you can vividly recall what it felt like to hold your baby in your arms for the first time. Your precious child took your breath away and removed you from your self. You felt a true moment of Dhyana, of oneness, at that time. It was meditative oneness brought about through love and devotion.

Love can lead to true moments of the Dhyana meditation. When we are truly in love with someone and we make love, we often feel a moment of absolute oneness, as though we have merged.

Moments of supreme beauty can also create oneness. I experienced such a moment during the death of my old cat, Tibby. She was 19 when she passed, and I am very grateful that she made it to an old age. She had been weakening. Her old eyes were barely open. My mother and I knew that Tibby was close to death from the sound of her thin and weak breathing and the film over her eyes.

Tibby had always been my mother’s cat. They spent so much time together. They were very close.

Just before Tibby drew her last breath, she fought for energy and with her last gasp of energy, she managed to crawl up onto my mother’s lap.

That was the very, very last thing she did: taking a seat on my mother’s lap, choosing to die with the person she’d spent all her life with. It was a wonderful moment. At the time of Tibby’s death, I was not myself. I experienced a moment of profound oneness with her. I experienced Dhyana.

There are moments when you will experience the state even if you don’t meditate.

Dhyana meditation gives you the control to create those moments of oneness. And once you can create that state, to remove yourself from your self, you’ll gain tremendous insight into the true nature of reality. And that is what Dhyana meditation technique is all about.

Have you experienced these moments? I would love to hear about it.

More From THE DAILY MEDITATION: