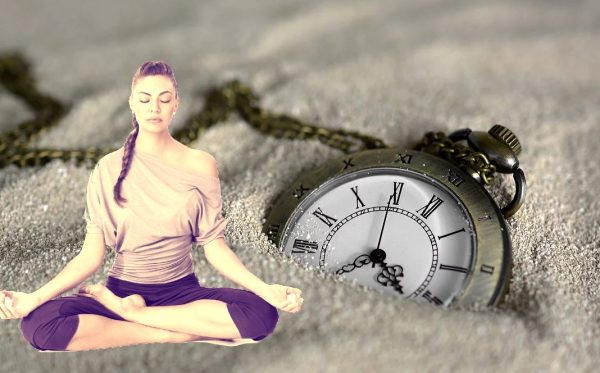 New research has revealed that meditation affects our perception of time, self and space, creating feelings of selflessness and timelessness. It is possible to use meditation to stop time, or to make it pass faster or slower.

Time is a subjective matter.

Mindfulness meditation, or Vipassana (a Theravada Buddhist tradition) creates control of emotion, and thereby changes the way we perceive time. Empirical research reveals that practicing meditation changes our sense of time and can even make meditation appear to stop entirely.

Being mindful means being consciously aware of our bodily sensations, thoughts and emotions. Because our perception of time is created through our present-moment conscious state, mindfulness meditation, which alters that state, changes our perception of time. This is why many advanced meditators feel a complete disconnect from time, as though everything is one eternal moment.

Our conscious state is always changing.

Sometimes we may be being mindful and acutely aware of the present moment. At other times we may be lost in thought, feeling drowsy, or lacking focus. We continually fluctuate between these different conscious states. And in doing so we continually change our perception of time, and our relationship to it.

Our sense of self is created chiefly by the interplay of those three phenomena: time, emotion, and awareness.

This is the very reason why when you find yourself waiting somewhere, such as at a bud stop, with nothing to distract you, and perhaps with a feeling of boredom, you will notice enhanced self-awareness and a slowing down of time. On the other hand, if you’re at a party, having fun, perhaps feeling excited and distracted by the atmosphere, you will notice a decrease in self-awareness and time will pass quicker.

These dynamic effects of feeling, time, and self, are experienced in our everyday lives, with our regular state of consciousness. The effect is enhanced when we enter altered states of consciousness.

Anything from sensory-deprivation, to trance, to meditation (which change our state of consciousness) can cause a dissolution of self and time, and this can oftentimes result in feelings of timelessness and selflessness, which is perhaps part of what is meant by Buddhists as becoming enlightened.

Scientific research into hallucinogens reveals that substances can cause loss of body connection and the loss of the perception of time, resulting in a collapse of the three-time perspective of past, present and future (“timelessness”). This creates a feeling of disconnection of self (“selflessness”) and the sensation of oneness with the universe.

Research reveals that self and time are related

Empirical research has found an association between psychophysiological measures of heart-rate and the duration of time. (Cellini et al., 2015).  Essentially, there is a direct relationship between our awareness of our bodily state and our perception of the speed of time. Time is experienced through self.

Research into vipassana meditation technique, which is essentially the traditional forebear of what is now called “mindfulness”,  as well as Samatha meditation (meditating on an object), shows that these methods increase present-moment awareness and thereby also change our perception of time.

Mindfulness affects emotional regulation, bodily awareness, and attention regulation. Because of the relationship between bodily self, emotions, and time, mindfulness has a direct effect on the perception of time. At first it seems to make time slower. This is because beginner meditators do not at first feel that sense of “selflessness”, rather they feel a need to rush through the meditation practice, and may even feel bored at first. This creates the perception that time is moving slower.

Advanced meditators, on the other hand, are able to enter a deep state of inner peace while also achieving selflessness, and this in turn leads to the feeling of “timelessness”, as though time has stopped.

Studies (Wittmann et al., 2015) show that advanced meditators feel that time is relatively slow, and indeed at heightened stages of meditation when we feel selflessness, we may lose the perception of time entirely.

The picture changes when we look to the past.

When looking to the past, our sense of time is based on the retrieval of episodic memory. If, for instance, you have the most exciting week of your life, full of all sorts of different events and activities, when you look back on this time it will appear longer because of the increased number of individual “episodes” within that time.

On the other hand, if you look back on the most boring week of your life it will seem like a shorter time because there are relatively few “episodes” in that week. Hence why times that appear to pass quickly when you actually live through them (like a vacation) may appear longer when you look back on them. The feeling of excitement at the time creates the perception of time moving quickly, and the increased number of “episodes” on that same vacation makes it appear like a longer stretch of time when you look back on it.

Although research into the effect of meditation on the perception of time are relatively few, there are some studies that do show this relationship.

One study (Sucala & David, 2013) asked participants to practice mindfulness meditation for 30 minutes a day for one week. At the end of the week the participants were shown a 5-minute video and then asked to judge how long the video lasted. The mindfulness group overestimated the duration of the video when compared to a control group.

In another study, mindfulness practitioners were more accurate in estimating and differentiating the passage of time in both milliseconds and seconds (Wittmann et al., 2014).

Therefore, the research suggests that meditation effects perception of time and increases our ability to measure time accurately.

How Meditation Effects Perception of Time While Meditating

Above we looked at how meditation affects the perception of time long-term. What is the effect of meditation on time while meditating?

In one study, (Kramer et al., 2013), individuals with no experience of meditation were asked to take a 10-minute guided mindfulness meditation). Using a task of duration judgment with stimuli lasting around 1 second, it was shown that the meditation group relatively overestimated the duration of stimuli after the session compared to before the session. Meditation causes the prolongation of subjective time.

This and similar studies reveal that time perception is expanded after meditating compared to before meditating. The increased awareness of the bodily self after meditation makes time slow down.

How To Use Meditation To Change Time

Based on the above scientific research we can start to see how to use meditation to change time.

The important take-aways from the science are as follows:

Based on the above, here are some tips:

1: If you want time to slow down, work on being present-moment minded by practicing mindfulness.

2: If you want to have more awareness and appreciation of the past moments of your life, live mindfully. This will create more “episodes” (awareness of individual moments in a certain timeframe). These increased “episodes” will increase your sense of time when you look back.

3: The best meditations to make time stop are ones that create selflessness. These are any techniques that, unlike mindfulness, make you lose sense of self. These include transcendental meditations and meditation on emptiness.

Have you noticed time seeming to speed up or slow down based on your meditation practice? Leave a comment and remember to subscribe.