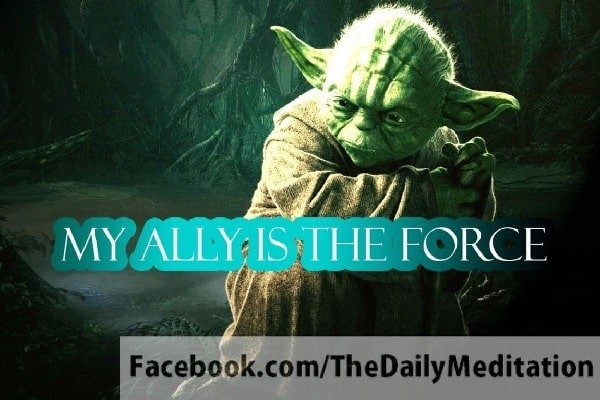 Did you know that you can actually use Yoda’s meditations from Star Ways?

Ever since Jedi became an official recognised religion, people have been trying techniques from Star Wars, including meditation.

There are tons of life lessons from Star Wars.

And for my Galactic Credits, the absolute best lessons from Star Wars are about meditation.

Meditation is very important to Jedi.

As a meditation teacher I have actually taught Yoda’s meditation techniques to many people. Which is quite easy because most of the philosophy in Star Wars is based on Zen.

Yoda is one of our picks of the best spiritual movie characters ever (I’d love to hear your opinion on that one).

And it is definitely worth actually learning Yoda’s technique in real life.

First up, here’s my Youtube video on Star Wars meditations. The article continues below.

1. Reach out and touch the force

But what is the force?

Qi is important to a lot of different spiirtualities and religions, and it is used in alternative medicine.

The life force is the primordial energy of life.

Energy creates life, makes it grow. Without energy there is nothing.

Yoda teaches Luke to feel the force. And all aspiring Jedi must do the same thing.

So if you want to be a Jedi, you need to feel the force.

Take 5 minutes to try this Qi meditation technique. It will make you feel the force.

2. Unlearn what you have learned

“You must unlearn what you have learned.”

This quote is one of the most important parts of Yoda’s meditation techniques.

But why would you want to unlearn what you have learned?

Because knowledge is a paradox.

Humanbeings are often limited by the things they think they know.

The answer is this: In Luke’s mind he is living in a world where it is simply impossible to lift huge objects using the mind. So Luke determines that he cannot do it. And it becomes a self-fulfilling prophecy.

Yoda then lifts the X-Wing out himself in order to prove to Luke that such things are possible. But even when he sees this miracle he cannot believe it.

“That is why you fail,” says Yoda.

To “know” is to limit the possibilities of your world. Stop knowing. Unlearn what you have learned.

Star Wars V: The Empire Strikes Back - "For my ally is the Force " (Force Theme, Yoda's Theme)

When we learn to meditate, we realise that the things we have “learned” are just thoughts in our heads. Learn that “Luminous being are we”.

3. Connect with your Luminous Being

Yoda explains to Luke that we are not this “crude measure” but that we are “luminous beings.”

What is a “luminous being”?

Luminous means “lit-up”. So naturally, Yoda is saying we are made of light.

We are not physical entities. We are pure energy.

Your light is your consciousness.

Yoda is telling Luke that we are not confined by our physical form but that we are an infinity of energy channeled through the miracle of consciousness.

But how do you become that energy.

Or rather, how do you realise that you already are that energy?

This side of the force is actually based on Daoism, and Eastern religion that holds that life is made of Qi and that health and wellbeing are based on how we manage that life force within us.

Take a look at my guide to Taoist Meditation. You will be amazed how much of Start Wars comes from Taoism.

All practicing Jedi should meditate to stop anger.

Yoda actually explains precisely why this is so important.

Once you strike down the dark path forever ill it dominate your destiny; consume you it will, as it did Obi Wan’s apprentice.

The story of Darth Vader / Anakin Skywalker is, in some ways, extremely realistic. And we all go through what Anakin went through, at least to some extent.

We might not have Darth Vader’s strengths. We might not be able to move objects with our mind. But we do have the same enemy as Anakin Skywalker and Darth Vader. I’m not talking about Emperor Palpatine, but rather our thoughts, fears, hatred and anger.

Yoda foretells Darth Vader’s fate because he has “Seen much fear” in him.

This is one of the best yoda quotes. But it’s more than just a yoga quote. It’s also a very true statement.

Fear, anger and hate are the enemies of us all. When we are afraid, we have two choices: we either overcome our fear (as Luke does) or we are consumed by it, as Darth Vader is.

Darth Vader’s fears losing his love, a love who just so happens to be called “Padme Amidala.”

Where Padme Amidala’s Name Comes From

Did you know: The name Padme Amidala comes from the Buddhist mantra Om Mani Padme Hum.

Padme can be translated as meaning Lotus (as in Lotus flower, and also as in the Boddhisvata Jewel-Lotus). Amidala comes from the Amida Buddha of the Pure Lands beliefs (1).

Padme’s character represents the idea of living with right intention on the right path towards enlightenment, as taken from the Noble Eight Fold Path (2)

So long as Padme is alive, Anakin Skywalker stays on the right path, the pure, Jedi path. If she were to stay alive Anakin would move towards enlightenment (he would become a Jedi Master). If Padme dies, Anakin Skywalker loses his purity, falls off the “Noble Path” and becomes Darth Vader.

But it isn’t Padme’s death that causes Anakin Skywalker to become Darth Vader. It is his fear of her death.

This is a very very important difference.

The problem for Anakin is not reality, it is not the fact that Padme is ill, it is his fear.

Fear is a delusional mode of thinking that is the construct of our own mind. This is something we learn when we practice fear meditations

When we meditate, as Yoda advocates, we let go of fear. But Anakin cannot, and that is why he becomes Darth Vader.

If only Anakin Skywalker could have differentiated his fear of reality from reality itself, he never would have become Darth Vader.

That is perhaps the most important message in the entire Star Wars saga.

Anakin Skywalker / Darth Vader’s story sums up many of the reasons why people learn to meditate and why our online meditation course has become so popular. Meditation is the best way to release your mind from fear, anger, hate and other delusional modes of thought. When we learn to meditate we clear and purify our minds.

“But how am I to know the good side from the bad?” asks Luke.

Meditation is the key to the inner peace that leads us down the right path.

Meditation is shown all over Star Wars.

Yoda, the Jedi master, is shown meditating many times.

Yoda advocates a clarity of mind and inner peace.

A master of philosophy, Yoda is always speaking of the importance of inner peace, which is obtained from meditation.

But just how do you meditate?

Learning to meditate it’s quite easy and can be self taught—though there are many meditation schools and meditation teachers for those interested.

Yoda says to Anakin Skywalker that “Fear is the path to the darkside” leading to anger, hate and suffering. Fear leads to the suffering of both the fearful person themselves (who suffers fear) and the people around them, who suffer from the negative emotions of the fearful individual.

Though you could write a Philosophy Masters Degree thesis on the dangers of hate anger and fear, suffice to say that if you live your life in the shackles of these three great negatives, you will greatly limit yourself and live an unhappy life.

By letting go of fear, anger and hate we create peace and love

. To do this, challenge your fearful ways of thinking with more positive ways.

For instance, if you are a college student currently studying for a masters degree in psychology (for example), you may be fearful of exams. Challenge this negative thought by seeing the exams as the opportunity to show your excellence in your field and as the beginning of a new career, once you’ve passed your exams and got a job. The specifics don’t matter too much. What matters is challenging negative thoughts with positive thinking.

To be a Jedi, we need to master our thoughts. The best way to do this is to use some positive thinking techniques.

Star Wars is all about walking the right path.

Many mindfulness meditation courses advocate the importance of being mindful of every decision.

Stay vigilant with your mind and you will guide yourself towards success. If you’re interested in learning more about mindfulness, consider taking Buddhist studies online.

Another important difference between Luke Skywalker and Darth Vader is humility.

In the prequel Star Wars trilogy, Anakin Skywalker fails to show humility. He is offended by being told that is not yet a Jedi Master (in Revenge of the Sith) and, because of this, chooses to try to become more powerful by getting closer to the evil Emperor Palpatine.

Anakin believes he is the most powerful Jedi in the universe and will do anything to prove himself right, but this only leads him to become a pawn for the Emperor.

Both The Emperor and Darth Vader offer Luke the chance to rule the universe but he doesn’t give in to temptation. It is Luke’s humility that leads him to success where Anakin Skywalker / Darth Vader failed.

As any positive psychology degree graduate will tell you, humility is one of the twenty four character strengths that lead to positive, happy and successful lives. Get past your ego and you’re set for success.

5: Not believing? That is why you fail.

One of the most famous scenes in the entire Star Wars saga is Luke’s training on Degobah.

In this sequence, Yoda is teaching Luke about the force. Yoda asks Luke to use the force to move his ship out of the swamp. Luke tries but fails. Yoda then moves the ship, to which Luke says “I don’t believe it” and Yoda, in arguably his most famous quote, says “That is why you fail.”

Luke had failed to have an open mind, to believe that something so seemingly magical could actually happen.

You don’t need a masters degree in psychology to see the importance of an open mind. If we do not have an open mind, if we are not willing to open our eyes to alternative possibilities, we limit ourselves to our current mode of thinking.

Simply opening our mind leads us to see the possibilities in life.

Can you feel the force?

Have you ever tried doing Jedi meditations? How did you feel after?

WHAT TO READ NEXT

Paul Harrison is a meditation teacher and writer. Paul has helped thousands of people to discover their true potential through mindfulness, yoga and meditation.