I was first introduced to meditation via pop culture. Specifically, I was a ten year old playing the arcade game Street Fighter 2 when I read a quote from a character called Dhalsim. The quote read, “I will meditate and then destroy you.” And yes, that is a stupidly assbackwards quote. It totally misrepresented what the practice is.

Pop culture often does totally lie about the practice. However, if you look closely, you’ll also find some truly great representations of meditation in pop culture too. Let’s take a look.

Best Ever Representations of Meditation in Pop Culture

Star Wars is absolutely loaded with references to meditation. Probably the most obvious example of this is in The Phantom Menace, in which we see Jedi Master Yoda meditating. And the portrayal of meditation is very real, even if it’s being done by a tiny green alien.

Beyond this, Star Wars was heavily inspired by Buddhsm, the spiritual home of meditation. In The Empire Strikes Back, for instance, when Luke is talking to Yoda on Degobah, Yoda references everything from nondualism to mindfulness, core themes of Buddhism. We can even find meditation in Star Wars video games. For instance, in the game Jedi Fallen Order, the protagonist Kal meditates in order to access the skill tree and to save.

As a huge Star Wars fan I’ve always been inspired by the spiritual aspects of the movie. Indeed, did you know you can even do Star Wars meditations in real life?!?!

The Karate Kid was one of the very first movies I saw that includes mindfulness.

In the movie, Daniel Russo [Ralph Macchio] wants to win the local Karate tournament, so he becomes a student of Karate master Mr Miyagi [Pat Morita]. One of the most important skills that Mr Miyagi teaches Daniel “Son” is to slow down and to be mindful. Indeed, mindfulness is the whole point to the famous “Wax on, wax off” scene, in which Mr Miyagi teaches Daniel to be mindful by having him clean his car slowly and consciously. Watching this scene reminds me of “soji”, in which Buddhists complete chores mindfully as a form of mindfulness.

I’ve always been a big Buffy fan. But I wasn’t expecting the “Slayer” to show up in this list. That was until I remembered Season 5 episode 5 of Buffy The Vampire Slayer: “No Place Like Home”.

In this episode, the Sarah Michelle Gellar character meets a monk who tells her to meditate. And so she does, in a very realistic depiction of meditation. 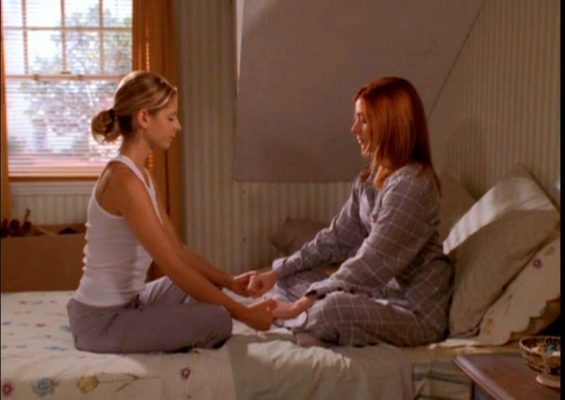 As she meditates, Buffy gains insight into reality and learns that Dawn [Michelle Trachtenberg] is not really her sister. This is essentially meditation leading to insight.

Although meditation itself is not shown in any of The Matrix films, directors Lana and Lilly Wachowski were clearly influenced by Buddhism and Taoism (two spiritual homes of meditation).

Nowhere is this more evident than in the scene in which Neo (Keanu Reeves) is “killed” by Agent Smith [Hugo Weaving]. Neo is seemingly resurrected as “The One”, a character who can see through the delusions of the Matrix to see reality. This was also heavily influenced by the idea of Brahman (true reality) in Hinduism.

I definitely did not expect to include Leonardo, Donatello, Raphael, and Michelangelo in this list. But then I recalled an awesome scene from the Teenage Mutant Ninja Turtles movie [1990]. The Turtles are despondent because Shredder has taken Splinter hostage. Together, the ninjas sit around a campire, holding hands and meditating. As they quieten their minds, Splinter appears before them. Splinter says, “Ultimate mastery comes not of the body but of the mind.” Here, he mimics countless spiritual gurus such as Buddha and Lao Tzu.

Somehow, a movie about four ninja turtles gave us one of the best meditation scenes in any movie.

Shoutouts to The Beatles

Above we looked at some of the best moments of meditation in pop culture. But arguably none of this would ever have happened without The Beatles.

Meditation was hardly even heard of in the West before The Beatles traveled to India in 1968. There, in Rishikesh, they met Maharishi Mahesh Yogi, the founder of Transcendental Meditation and one of the most famous meditation teachers. Because of the gargantuan popularity of The Beatles, millions of people in the West started to get into the practice.

Since then, countless celebrities have been meditating, and this has helped meditation to become incredibly popular.

And of course, today, things have gone a bit mad

Finally, today, in 2022, meditation is now an integral part of pop culture, and there are tons of different meditation games and meditation apps.