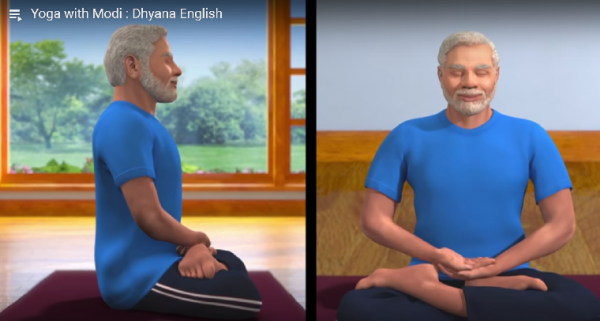 Modi is just one of many famous celebrities offering meditation and yoga classes for free in order to help people stay fit during self-isolation.

Modi has done things a little differently to most yoga teachers. The 69-year-old created animated 3D videos of himself doing various yoga asanas (yoga poses). He stated in a tweet that he was uploading the videos because numerous of his followers has sent questions about how he practiced yoga during isolation.

Previously, Modi stated that yoga is an “integral part of [Indian] culture.” During the fifth International Day Of Yoga in 2019, he stated, “We should make efforts to take yoga from cities to villages and tribal areas. Yoga is above religion, caste, colour, gender and region, it is above everything,” He has previously expressed that he believes yoga is the key to preventing health issues in young people.

The Modi yoga videos were uploaded after a follower asked Modi about his fitness.

“During yesterday’s #MannKiBaat, someone asked me about my fitness routine during this time. Hence, thought of sharing these Yoga videos,” he said in a Tweet.

He did state that he is not a yoga expert nor a healthcare professional, but that yoga has been a big part of his life for many years. “Practising Yoga has been an integral part of my life for many years and I have found it beneficial,” he tweeted. “I am sure many of you also have other ways of remaining fit, which you also must share with others.”

All Modi’s yoga videos are available on Youtube. And he has shared instructions in both Hindi and English, so all viewers can enjoy them.