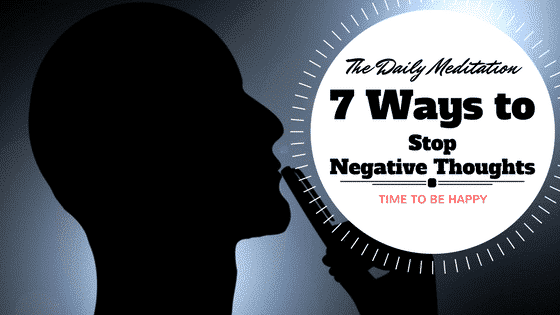 We human beings experience an average of 50,000 thoughts every day [1].

That’s one thought for every 1.6 seconds of the day.

Many of those thoughts are unhelpful and even painful. Some are obsessive, recurring thoughts that seem impossible to get rid of. [Read my guide to Thought Stopping Exercises]

For instance, you might find yourself obsessively thinking and worrying about the future. This is one of the most common types of negative thinking because there is always something in the future that could potentially go wrong.

Other common examples include:

Over time, these thoughts will turn into negative self beliefs, which can seriously affect your life.

Thankfully, there are ways how to get rid of negative thoughts. There are mental techniques and exercises that can calm the brain and stop the flow of ideas and ruminations in the mind.

You Need To Be Selective When Getting Rid Of Negative Thoughts

If you frequently  think negative thoughts, it’s time for a change. One smart strategy is to use some simple exercises to stop thinking too much.

I said previously that we think on average 50,000 thoughts per day. What’s worse is the percentage of thoughts that are negative. Ruth Harris, the author of The Happiness Trap, says 80% of everyone’s thoughts are negative to some degree.

However, if that sounds bleak, bear in mind that there is a good reason for this negativity.

Imagine you wanted to buy a house but knew you couldn’t afford it. You might think negatively about money. You might tell yourself, “I can’t afford that house.” That’s a simple negative thought. Taken at face value you might think it would be more positive to to say to yourself, “I’m buying that house because I know I’ll make enough money to afford it.” But what if you don’t? What if you end up bankrupt because of it and spend your life paying off debt? In that instance your negative thought would have saved you from a lot of suffering.

As Ryan Holiday [editor for the New York Observer] says: “Far too many ambitious undertakings fail for preventable reasons. Far too many people don’t have a backup plan because they refuse to consider that something might not go exactly as they wish.”

Cognitive scientist Art Markman, Ph.D agrees. “Research actually suggests that focusing on a positive future lowers people’s motivational energy. If you want to do a better job of achieving difficult goals, then it is important to contrast the future and the present. In particular, it is important to know what the obstacles are that will get in the way of achieving the desired future.

So while it is important to know how to stop thinking negative thoughts when those thoughts are unhelpful, it’s always good to remember that some of your negativity may actually be valuable.

Getting rid of negative thoughts will make you healthier

Did you know, one of the best things you can do for your health is to stop stress.

Stress, of course, is very closely related to negative thinking. Fears and obsessive painful ideas in your mind can cause serious mental and physical health complications. Take a look at the infographic below for more on this.

Different types of thoughts have been proven to produce different physical manifestations in the body.

Interestingly, physical and mental pain produce virtually the same result in the body.

That’s why some people actually take pain killers for emotional pain, though this is probably not recommended. (Here are some smarter ways to control your emotions).

Think about the last time you felt stressed. You probably experienced strain around the neck and lower back. This is one of the most common manifestations of negative thinking, and one reason why we need to stop thinking negative thoughts. But there are many more.

In ‘The Sacred Life,’ David Suzuki wrote that “condensed molecules from breath exhaled from verbal expressions of anger, hatred, and jealousy, contain toxins. Accumulated over 1 hr, these toxins are enough to kill 80 guinea pigs.”

According to an article in The Lancet, San Francisco based researchers examined the deaths of 30,000 Chinese-Americans and 400,000 white people and discovered that the Chinese who believed themselves to have been born on an ill-fated year (according to Chinese astrology) died young, which the scientists states was precisely due to their belief in their ill-fated birth.

In another study, 79% of medical students developed the illnesses they were studying due to paranoia.

The problem is that negative emotions trigger the amygdale in the limbic brain to produce a “Fight or flight” response in the body [3]. In fight or flight mode, the immune system stops function properly, leading to illness.

How To Get Rid Of Negative Thoughts -- Exercises

The problem is not that we have negative thoughts. The problem is that we believe those thoughts are true.  (This is especially true for people who suffer from anxiety. If that’s you, read my breakthrough guide to stopping anxiety today).

To remove negative thoughts from your mind forever, you have to learn to realise that the ideas the flow through your mind are not reality. This is true for both positive and negative conceptions.  Being fixated an idea we deem “positive” can cause problems too.

Imagine believing that you’ll never die. Now how does jumping off a skyscraper sound? Okay, it’s an extreme example, but it certainly illustrates the point.

This is why, while you’re reducing negative thinking, you might want to reevaluate some of your “positive” ideas too.

1: Meditate for clarity of mind:

Meditation has been proven to empower individuals over their thoughts.  And there is no better way to beat depression and sadness than with meditation. When you meditate you silence your mind and come to observe your thoughts calmly.

2: Write it out on paper

This is one of my personal favorite techniques to stop negative thoughts. It’s a lot easier to see your mental conceptions for what they are (often just words) when you write it out on paper. Write all your negative thoughts out and then look at them. You’ll very quickly realise how unreal they are.

Some thoughts don’t comprise of words but rather images. For instance, perhaps you think you’ll become ill. In this case draw out precisely what your mind is telling you will happen.

If you’re an open person, this is one of the best techniques to stop negative thoughts. The average person will pretty quickly tell you if your conceptions are total bullshit. So, tell them. They will gladly give you a dose of reality.

Whether your thought is a voice in your head or a picture, try playing with it. For instance, if it’s a voice then imagine the voice changing, becoming higher pitched, lower pitched, louder, quieter and so on. If it’s a picture make it brighter, dimmer, bigger, smaller, and so on. By playing with the thought you teach yourself that you have ultimate control over your mind.

When you think the same thought backwards you essentially make the thought a little game. You make it something tangible that you can play with. This technique is definitely alternative but it definitely works.

Objectively appraise the thought. If it’s a negative thought that actually holds some important truth then you might like to rate the thought highly and even thank your mind for the helpful information it provided. If it’s an utterly stupid and worthless thought, rate it a 0 and tell your mind to come up with better ones.

Scientific research has confirmed that when we watch negative TV shows (the news, for instance), we develop a negative view of the world. Longitudinal studies show that people who watch the news are statistically more likely to dwell on negative thoughts. Time to give up TV.

Mantras are word or phrases with psycho-spiritual powers (similar to spells and affirmations).

The following is a classic NLP (neurolinguistic programming) technique. It is a powerful procedure for getting rid of negative thoughts.

All these techniques to stop negative thoughts revolve around the same idea. You are teaching your mind to recognise that thoughts aren’t real and that you are the master of  your own mind.