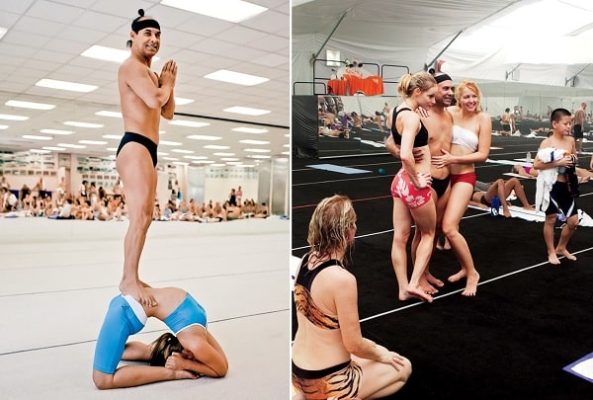 The show, which premiered at the Toronto International Film Festival and will air on Netflix in Autumn, begs us to ask why yoga predator Bikram Choundhury has not been dealt what many consider rightful punishment.

Bikram Choudhury, the creator of Bikram yoga, has been accused many times of sexual harassment, racism and homophobia. Allegations placed against Choudhury include two lawsuits for rape, and allegations of sexual battery, false imprisonment and harassment. Victims state that Choudhury created an inner circle of people who would help him find found women to assault [1].

He has also sullied the name of yoga and turned our sacred practice into something sinister.

And yet he has escaped what many consider his rightful punishment. He should be in jail and yet is not. Why? That’s the question of the heart of Netflix’s Bikram: Yogi, Guru, Predator.

The podcast “30 for 30” explored in depth both the revolution that Bikram Choudhury brought to the West and the allegations of his crimes. The podcast serves as the basis for Netflix’s Bikram: Yogi, Guru, Predator and adds footage and testimonies from the victims. The sheer emotion and anger of the victims will tear a whole in your soul and make you beg the courts for justice.

At just 86 minutes this documentary fills every moment with depth, squeezing every bit of juice out of the story. The result is a powerful documentary that, more importantly, reopens the conversation and, perhaps, could see justice prevail.  Although it should be said, while Bikram Choudhury’s crimes are indeed disturbing, many yogis on the show do also comment on the positive impact he has on their lives.

The show also makes us question whether the entire nature of Bikram yoga was created as a way to break people: forcing them to do 26 asanas in intense heat. There have notable been many scientific studies that show that there are serious dangers of Bikram yoga, although it is still one of the most popular types of yoga today even despite the risks to health and the sinister background story of its creator.

The documentary reveals how Choudhury would stalk the humid yoga studios in a revealing speedo while firing insults at his students. One of his students describes him as a ‘cross between Mother Theresa and Howard Stern”. And it begs the question how many so called “gurus” harbour this Jekyll and Hyde nature—having the ability to heal but using for their own evil ends. Many feel this is true of meditation guru Osho as well as maum, and indeed many people state that even Transcendental Meditation is a cult.

Bikram: Yogi, Guru, Predator shows how Choudhury’s yoga studio eventually fell, as he denies several allegations, and later begins teaching in hotel rooms where it is alleged he committed rape.

It was Sarah Baughn’s accusation in 2015 that marked the real turning point where Choudhury’s crimes were stacking up against him. And her story serves as the main voice of the documentary. She reveals the horror of being trapped in Choudhury’s circle, and the effects it had on her.

Sarah Baughn talks about alleged harassment by Bikram Choudhury on Vanity Fair Confidential
this documentary forces you to question how much trust we place in “gurus”. They are individuals we trust to heal us. But too often that trust is based on blind faith, and it painfully turns sour all too often.

Is it right to place faith in a so called spiritual guru? How is it possible to tell the good from the bad? And just how far should we invite these gurus into our lives? Bikram: Yogi, Guru, Predator will make you ask those questions.

And it may just get the world talking about Choudhury again. There is a definite sense that the Netflix documentary has been concocted specifically to reopen the book on Choudhury and his alleged crimes. And that can only be a good thing.

In the end, will justice prevail? Only if we keep this conversation going.

Paul Harrison is a qualified meditation teacher and writer with more than 15 years experience in meditation and mindfulness. He studied meditation in Oxford, UK, and Hamilton Ontario Canada, and earned his degree at Staffordshire University. Paul has helped thousands of people to discover their true potential through mindfulness, yoga and meditation. You can read his books on Amazon
Tags: film, spiritual, yoga