New scientific research reveals that there are significant benefits of mindfulness and meditation for OCD [obsessive compulsive disorder]. These two exercises can help to reduce the symptoms.

OCD is a mental health condition afflicting 1 in 40 adults and 1 in 100 children [1]. That means there is a very high chance that either you yourself will suffer from it, or you will know someone who suffers it. Most people with the condition fall into one of several categories: Washers, Checkers, Doubters, Counters and arrangers, and hoarders. The signs include double-checking everything, obsessive cleaning, routines, and constantly checking with loves ones to see if they’re okay.

My experience with meditation and OCD comes mostly because my girlfriend of 12 years suffers from the condition. I have witnessed how it can impact a life and make it very difficult to relax. But the good news is that mindfulness helps. And as a meditation teacher I have been able to help many people overcome OCD with meditation.

Meditation is the practice of focusing the mind on one thing, such as the breath. Originally a Buddhist and yoga technique, meditation is now a scientific practice used in professional healthcare to help with numerous conditions, including obsessive-compulsive disorder.

Let’s take a look at the fascinating link between meditation and OCD.

Scientific research has shown that there are many benefits of mindfulness meditation for OCD [2].

American psychiatrist Jeffrey Schwartz is renowned for his work with people with obsessive-compulsive disorder.

One of Dr Schwartz’s most interesting cases was when he was hired by Leonardo DiCaprio to teach him what it was like to have the condition so that he could play Howard Hughes in The Aviator. Howard Hughes is one of the most famous people to have suffered from the condition. [3]

Dr. Schwartz taught DiCaprio what it was like to have the disorder. And he did such an excellent job of it that DiCaprio actually suffered from the condition for one year before getting back to normal (the good news is that he did get an Oscar nod for his performance).

Thankfully, he also made some remarkable breakthrough when it comes to curing OCD, with meditation and other exercises.

Dr Schwartz Use Of Meditation For Obsessive-Compulsive Disorder

Dr Schwartz has been treating Obsessive Compulsive Disorder for decades. And his number one method has remained the same. He uses the Buddhist practice known as mindfulness meditation for OCD.

“One evening, while out of the office, Schwartz realized his patients needed more to do, something to focus on besides the intrusive thoughts,” says Steve Volk, writing for Discover Magazine.

“He thought back over the practice of mindfulness and found an analogy he liked. In meditation, if he became emotionally invested in a particular train of thought, he sought to refocus himself by drawing his attention back to his breathing.”

Using that same concept, he recommended that his patients replace monitoring their breath with monitoring whatever behaviour they found most compelling. He instructed his patients to replace their OCD behaviour with one healthy alternative. Each time a patient had an episode, they would replace it with an alternative, such as going for a walk or doing Zen-gardening. 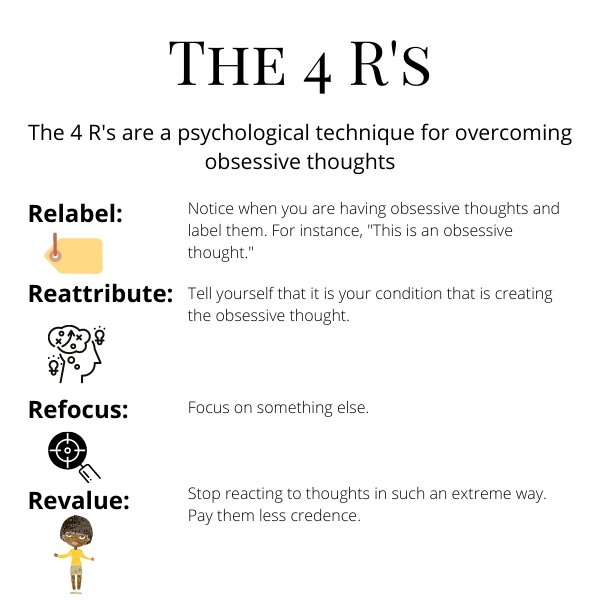 Reattribute: Tell yourself that it is your condition that is creating the obsessive thought.

Refocus: Focus on something else.

Revalue: Stop reacting to thoughts in such an extreme way. Pay them less credence.

The fourth step is crucial and can take time to learn. Schwartz called this step Revaluing. The obsessive thoughts that patients once considered so necessary were to be systematically deconstructed, understood and finally revalued. Schwartz’s recommended people to revalue obsessive thoughts as “trash … not worth the grey matter they rode in on.” Conversely, Schwartz’s patients learned to place high value on the performing different actions that were not based on their OCD.

Schwartz’s four steps worked, but it wasn’t easy. It took what Schwartz described as “a tremendous force of will.”

It was hard for people with OCD to follow the 4Rs.

To help, Schwartz started to prescribe mindfulness meditation for OCD, and subsequently, more scientific research has confirmed that there are indeed big benefits of this practice.

With mindfulness, patients are given a healthy, empowering and natural way of treating obsessive-compulsive disorder. It can be self-taught and is very easy to start.

Both OCD And Meditation Are On The Rise

Not so long ago, Obsessive Compulsive Disorder was considered a rare condition. But experts claim that it was often misdiagnosed because many people were not comfortable approaching their doctor about mental health conditions.

If you feel uncomfortable talking to the doctor about anything, stop. Remember. Your doctor has seen people for all sorts of conditions. They will treat you with respect, and they are the best people to speak to.

Today, OCD is the fourth most common mental health condition in the West and affects everyone regardless of sex, age, or race.

The good news is that, while the disorder is on the rise, mindfulness is too. Mindfulness meditation is one of the fastest-growing health trends of the 21st Century. This is likely because so many people are starting to understand the nature of mental health problems, and mindfulness offers a natural remedy. It can help with issues like depression [READ: Meditation For Depression].

How to use mindfulness meditation for OCD

You can try using a video like the one below, or some exercises.

There’s a caveat here though. Because even though mindfulness is effortless to understand, and perhaps even easy to do, it is bizarrely difficult to remember to be mindful. That’s why I recommend trying some mindful activities to develop a habit, such as mindful walking or mindful breathing.

In many ways, dealing with OCD is similar to dealing with other negative thoughts. The problem, as with regular thoughts, is that we allow our thoughts to dictate our actions. This is why when someone experiences an OCD thought, they soon act on it. By using a combination of mindfulness and the 4Rs, we can learn to change the way we process those thoughts, and in so doing we can prevent them from directing our actions, ultimately giving us power over OCD-thoughts.