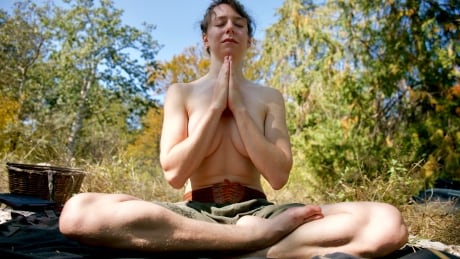 Jennifer Frizzley is the latest of many women to be body shamed during a yoga class. And this simply because she decided to take her top off during hot yoga class.

Now, she is fighting to create a nude yoga group for women and to create equality in the yoga studio. Anytime I hear good news like this it makes me to proud to be part of this community (I give meditation classes online).

Jennifer Frizzley was happily practicing yoga at her favorite yoga studio, Quantum Yoga Club. Temperatures were raised to a point where she could not longer continue her session with her top in. She did not have a sports bra, and so chose to simply take her top off and continue her hot yoga topless.

Frizzley actually asked her yoga teacher if it was okay for her to take her top off, and she was told that yes, she could. After all, this is a yoga class. It’s about self liberation as much as pure exercise. So why not do it topless?

After her class, however, Frizzley was approached by her instructor, who demanded that she cover up because the other students found it distracting.

“I was told that my body was distracting and that I needed to cover up,” Frizzley told CBC. She sees this as a flagrant case of sexism, one that is all too common at the yoga studio. While men do yoga topless all the time, it is considered inappropriate for women to do precisely the same thing.

“We need to be really careful because this ideology is unjust,” said Frizzley. “It’s discriminatory and it’s very dangerous.”

In B.C it is legal for women to be topless in public. So Frizzley was well within her rights to take her top off, especially given that this was a hot yoga class and that there are dangers of hot yoga [Bikram].

Frizzley notes that nearly all the men in the hot yoga class her topless, so why shouldn’t she be?

Frizzley is now fighting for equality in hot yoga classes

Frizzley strongly believes that women should be permitted to practice hot yoga topless. And she is currently trying to gain support to create a topless hot yoga event.

“Equality calls for the equal treatment of men and women and thus an equal dress code,” Frizzley said.

She’s now started a Facebook group for yoga enthusiasts who are comfortable being topless.

So, should women be allowed to practice hot yoga topless in the yoga studio?

Personally, I believe yoga is about liberation and if you prevent someone from simply baring their skin while practicing, you’re definitely not helping with liberation.

I live by the mantra “You do you.” I mean what harm does it do to express individuality? And if you want to be topless… well… do it. I always presumed that that was precisely the attitude that all yoga studios should have, too. Yoga is traditionally a philosophical practice as well as a physical experience. It is ultimately about purity of self and self-liberation, so why in the Blue Hell should women not do hot yoga topless?

Yoga should be leading the way in creating equality and self acceptance. Women certainly shouldn’t have to face body shame at a yoga studio—anywhere, in fact, but especially at the studio.

Nude Yoga Is All About Self Acceptance

Many cities do now have specific nude yoga classes. And they are becoming increasingly popular.

One of the main reasons why nude yoga classes are becoming so popular is because they help with self acceptance, particularly for people who have been body shamed or who have faced trauma [read: yoga for trauma survivors]

The idea of nude yoga classes is that all members practice nude together and the act of being nude and doing yoga in a group setting increases self acceptance. Of course, there are also those members who simply enjoy doing something that it is outside of societal norms.  Some of these groups also focus on partner work so that members can become comfortable touching the human body. There are also some people who openly admit that they do nude yoga as a pick-up strategy.

One things for sure: If you actually feel comfortable doing downward dog naked in front of a group of strangers, you’re definitely comfortable in your own skin.