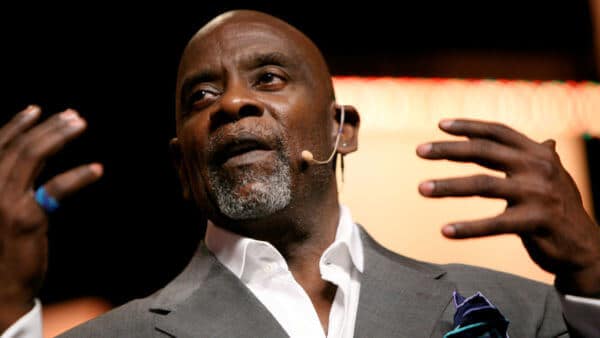 The real Chris Gardner (of “The Pursuit of Happyness” fame) is the perfect role model for anyone fighting against society to make the most of their life.

Christ Gardner went from being homeless to working for stock broker companies. And then he became a truly inspiring self help guru.

There are huge lessons to learn from Chris Gardner. His wisdom can help anyone turn their life around.

Facts About The Real Chris Gardner

How much is the real Chris Gardner worth? $60 million

What are some Chris Gardner Books? The Pursuit of Happyness & Start Where You Are

5 Things Chris Gardner Wants You To Know About Success

Chris Gardner’s life was hell.  The facts that he survived it is one of the most inspiring examples of staying positive in negative times.

One setback after another, with no contact with his father and an abusive step father. His mother was later imprisoned, she was Chris Gardner’s main role model.

But somehow this man still made a success of himself. #legend

Here are 5 things Chris Gardner wants you to know about success.

1: Start Where You Are

[bctt tweet=”If you want something, go get it. Period. —Chris Gardner ” username=”t_d_meditation”]

The most important part of the success mindset is starting where you are.

The vast majority of us put far too much emphasis on tomorrow, that cancer of the mind that keeps our true lives always one step ahead of us.

The real Chris Gardner didn’t have much choice but to start where he was in his own search to find happiness, and perhaps this is one aspect that set him apart.

He couldn’t just sit by and watch life pass.

He quite literally had to fight to survive.

Out on the streets, homeless, what other choice had he?

He was forced to learn on of the most important life lessons of all; focus on the present moment.

Chris Gardner  had to make do with what he had, and in this he found a most valuable wisdom. It doesnt matter where you are on your path in life, all that matters is that you take a step forward.

This lesson is really the entire point of the book (indeed, where much of the rest of Start Where You Are feels forced, this lesson is vital).

There is a certain poeticism to the fact that only by being at absolute rock bottom was Chris Gardner able to learn this lesson about the power of now.

It is amazing how hitting rock bottom forces you to take hold of your life and how many people wait until they are at an absolute low before doing so.

2 : Do it Yourself!  The Cavalry Aint Coming

[bctt tweet=”You can only depend on yourself. The cavalry aint coming —Chris Gardner” username=”t_d_meditation”]

There is no cavalry coming because you ARE the cavalry and because if you need someone to help you then you yourself are that someone.

There is no movie star coming to save the day; you are the star in your own pursuit of happyness.

‘You drove yourself here.’

You are entirely responsible for your own career.. Work hard and it will pay off. If you expect something for nothing you are going to be sorely disappointed.

The world owes you nothing.

Work for your success.

[bctt tweet=”I was homeless but I wasn’t hopeless. I knew a better day was coming —Chris Gardner” username=”t_d_meditation”]

Gardner says you should go grab a pen and paper.

Starting from day one, draw the line of your life. The ups and down, the peaks and troths. Do it in detail, says Gardner.

This exercise was a big deal for Chris Gardner. It gave him a sense of development in his life. It taught him that we are always moving, always heading in some direction.

At times it can feel that we are just in a slump, like we are stuck in life.

The mind tricks us into believing that we are a victim. By drawing the lines of our lives we can see how all this peaks and troths lead together.

When you draw your line, look at the moments when your line changes direction.

These changes of direction represent moments when your life changed course. By zooming in on these moments, on these actions, you will see what caused your life to change. You will see how any action you take now will change the cause of your destiny.

4 : The lesson is life itself

Life teaches you the lessons as you go along.  Keep your ideas open and your dreams alive.

The single most important thing Chris Gardner taught the world is open our eyes to life itself.

Realise that life is a journey. Yeah, sometime you may be flat-out broke. Sometimes you will wonder how the hell you are going to survive. But life is always moving. Destinies are always changing. If Chris Gardner’s life took him from homeless to multi-millionaire, where is your life going to take you?

5: He “started from the bottom now he’s here”

Chris Gardner’s main life lesson is that no matter what kind of hell you’re going through right now, you can still make it to the top of the game.

This is what we learn from Chris Gardner’s story.

You will probably learn more about life from Chris Gardner than you would from an entire master’s degree in psychology.

For those who haven’t seen the movie—which sees Will Smith in Chris Gardner’s shoes during the year of homelessness— or read the book— which covers much more ground— Chris Gardner is famous for personifying the rags to riches story.

But here’s the point: he started from the bottom (now he’s here).

His main lessons is this: take life by the horns and run with it.

Start where you are (as in right now).

That’s the title of his book, so you know he means it.

GET IT ON AMAZON