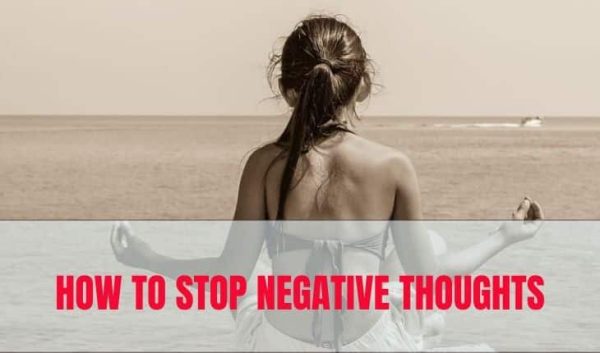 In my experience as a meditation teacher, the more I try to forcefully stop my thoughts the worse they get. I find it impossible to completely stop thoughts. And science backs this up.

It might seem like a good idea to stop negative thoughts, especially if you’ve been suffering from stress and anxiety. Thought stopping seems like a good choice because you no longer want to experience thoughts that cause you pain. Catastrophic thinking can be a serious health problem that causes worry and anxiety. So what can you do about it?

Yes, there are some powerful techniques for stopping negative thoughts.

Let me show you why thought stopping exercises are a bad idea. And I will show you what to do instead.

What Is Thought Stopping And Does It Work?

Thought stopping exercises are essentially the idea of completely preventing any painful thoughts from occurring. However, you might wonder whether thought stopping works.

There are actually times when thoughts do stop literally. This is called “Mind Blanking”. Research conducted by Adrian F. Ward and Daniel M. Wegner and published in Frontiers In Psychology reveals that “when the mind seems to disappear, there are times when we have simply failed to monitor its whereabouts—and there are times when it is actually gone.” [1]. You have probably experienced this. I know that I myself often have moments when I realise my mind has been gone somewhere although I m not sure where. This is called “Mind Blanking”. However, for most people, “thought stopping” means interrupting thoughts that cause pain.

The most basic example of a thought stopping is when we literally tell the mind to “Stop!
Some ideas in your mind can cause immense pain [just take a look at these 11 brutal types of negative thoughts].

However, thought stopping exercises will actually just make your situation that much worse.

Scientific research shows that when we try to stop negative thoughts, we actually just make the thought come up later, and often worse than it was to begin with.

Research by Wegner, D. M. at Harvard University [2] shows that when we try to stop thinking negative thoughts we actually cause the them to crop up again later. Not only this, but it actually causes an increase in feelings of anxiety and depression.

Thought-stopping-exercises have been undermined as a psychological exercise. It is generally agreed that attempting to stop your negative thoughts is a universally bad idea.

Imagine a big pink elephant in your mind. Visualize it clearly.

Force yourself to stop thinking about the elephant for ten minutes

After ten minutes of suppressing the thought, notice how you cannot help but think about the elephant

Thought suppression actually causes you to think the thought more, not less. And that is why thought-stopping-exercises simply do not work.

And that means that when you do experience a negative thoughts, stop trying to prevent the thought and actually pay attention to it.

In fact, rather than helping us, thought stopping exercises will actually harm us. Attempting to silence those mental ruminations will actually just cause them to rise up again and again. Robert L. Leahy Ph.D. states that “thought-stopping leads to thought rebounding.” [23

So, if thought stopping exercises do not work, what can you do?

You will never stop negative thoughts by simply holding up a big red “STOP” sign to them.

Dave Carbonell, PhD says, “Worry and other forms of unwanted thoughts are like a heckler, rather than a mugger. You’ll be better off working with them than against them.” [4]

I know from my own experience that when I try to just end negative thoughts they simply get louder and more intrusive. Putting up some psychological barrier does not work for me and actually makes my situations worse. I find it more effective when I work with my mind instead.

Here is how to work with negative thoughts.

Instead Of Using Thought-Stopping-Exercises, Do These 4 Things Instead

1. See negative thoughts for what they truly are

Instead of using thought-stopping exercises, learn to see your negative thoughts for what they truly are. The best way to do this is to practice Buddhist vipassana meditation.

Vipassana meditation technique is an exercise in which we label our different ideas and imaginings as they run through our minds. For instance, if we see a visual idea of something bad happening, we simply label it “visual”.

This simple exercise stops thoughts from having such a big impact on us. It does this by simply reminding us that thinks in our minds are only in our minds.

Too often we see thoughts as absolutes. We get lost in our imaginings and forget that they are not real. By simply saying to ourselves, “This is a thought”, we remind ourselves that our thoughts are not real. Then they have less of an emotional impact on us.

2. Imagine it happening and ask “What then”

One of the biggest problems with so called “Thought stopping exercises” is that they train the mind to think of a negative thought as an absolute “No.”

If you stop negative thoughts, you prevent your mind from seeing past them. This creates almost a void, because your mind does not know where to go after it encounters that negative idea.

Rather than using thought stopping exercises, ask “If the worst thing happens, what happens next?”

For instance, let’s say you’re terrified your marriage is heading to the divorce court. You try using thought stopping exercises to prevent yourself from thinking about it. But the those ideas keep ruminating. Ask yourself, “What then?” What if you do break up? You will go through pain, recover, and move on, and before long the time will come when you are okay again.

By continuing the thought in this way, you teach your mind that the negative thought is not an absolute, and that even if the worst happens life will still go on.

3. Remind yourself of all the things that are preventing it from happening

When we focus on simply stopping thoughts, we prevent ourselves from logical reasoning.

Instead of using thought stopping exercises, challenge those painful ruminations with some rational logic.

Ask yourself both why the negative thought could happen and why it won’t happen.

For instance, let’s say you’re worried about losing your job because you’ve been performing badly recently.

Ask yourself why you could lose your job, and list the reasons (I’m performing badly / my results are declining / I don’t know how to fix the problem). This gives you valuable information that you can use to solve the problem.

Now ask yourself why it wont happen (because I’m working on improving my performance / because I have great ideas / because I’m going to put in overtime to make sure I hit my targets).

By acknowledging both sides of the argument, you give yourself valuable insights that can help you to work around a possible negative event, and you also exercise your mind in thinking rationally about stressful events.

Too often a negative thought simply needs to be acknowledged.

Ironically, this is precisely what thought stopping exercises prevent you from doing. When you try to stop them, you prevent yourself from acknowledging it.

Instead of blocking the thought, ask yourself, “What is the lesson in this thought, and how do I act on it?”

For instance, let’s say you are experiencing painful thoughts about money. You’re worried you’re going to go broke and fail to pay the rent. You could block this thought, in which case you will learn nothing from it. Or you could ask yourself, “What is this thought teaching me? And how do I act on it?” Then you can see that the thought is teaching you to be more careful with money, and you can act on it by not going to the casino.

One of the reasons why thoughts cause pain is we do not accept them. Buddha taught that acceptance is the key to happiness. On way to accept thoughts is to imagine the absolute worst that could possibly happen and then imagine getting through it.

“Picturing yourself tackling the imagined worst possibility often gives us confidence that even if the worst were to happen, we would still be able to handle it.”

Thought Stopping Exercises will do you more harm than good. Because ultimately, painful thoughts exist for a reason, and they demand to be acknowledged.

Instead of stopping those painful ideas in your mind, exercise your rational mind. Learn to see those thoughts for what they are and what they represent.

What can you learn from that negativity? How are those negative thoughts helping you. And how can you use see them for the better?