If someone had asked me, when I was young ,what it means to have a spiritual experience, I probably would have suggested something along the lines of experiencing winged angels and a man sitting on a throne in the clouds judging us for or moral or immoral behaviour.  But even as a child I knew there was something wrong with this description.  It never really resonated with me and I intuitively knew there was much more to the story.

The Actual Meaning of a Spiritual Experience

The real meaning of a spiritual experience, in actual fact, is a story of humanity, our history and our future.

Throughout history mystics, saints and seers would describe contact with something much greater than ourselves, with the characteristics of love, peace, bliss and compassion.  Once they contacted this plane of existence, everything in their life would change.

The mystics would become more selfless, empathetic and compassionate towards all beings.  They would describe being guided by other worldly entities, having mystical visions, seeing our future and our past.

Each of these mystics stumbled upon what I believe to be an ancient technology for expanding consciousness beyond the normal limits.

The techniques of course have differences, but they also have similarities, and all originate from a common lineage and ancient culture.  The earliest civilizations that were known to have understood this technology were the ancient Sumerians, Egyptians, Indians, Chinese and Mayans to name a few.

They all can be traced back to an advanced culture that existed hundreds of thousands of years ago.

Plato, the famous Greek, wrote about an advanced island civilization that sank beneath the sea called Atlantis.  There is much speculation about Atlantis and who these people were, but one thing I know for certain is that they have past down a spiritual technology for expanding consciousness, to all the civilizations they touched, and that this spirituality is important.

Much of the writings on the walls of the pyramids are instructions on how to achieve enlightenment.  It is thought that the pyramids themselves are designed in such a way to harvest an undetectable type of energy and channel it into the initiate to allow them to open a gate within their minds.  It is the same gate that we pass through at birth, death and during states of enlightenment [1].  The energy they describe is what Hindus call Prana, and what the Chinese called Chi.  It is a sort of bio-spiritual energy.

The entire practice of Yoga is in fact a method of freeing chi or prana in the body, allowing it to flow freely uninhibited and using it in meditation to open the same gateway in the mind, achieving enlightenment or in yogic terms “union with the divine”. That is what it means to have a spiritual experience.

How I Had A Spiritual Experience

Being of a scientific mind, you would never have convinced me of spiritual experiences prior to 2017, when everything in my life was about to change.

I had inadvertently performed all the techniques necessary to release the extra stored spiritual energy, (prana or chi).  The extra energy is stored in your lower back near your Sacrum, which is a bone whose name shares the same origin as the word Sacred.

In yogic science they describe this energy as the sacred kundalini, described as a serpent coiled three and a half times laying dormant at the base of the spine until aroused.  The kundalini, it is said, is a spiritual energy that prepares your body to handle even more energy, helps you identify and remove blockages to your spiritual path, such as past traumas, dogmatic thinking, unhelpful beliefs and mindset, grief, shame, etc.;  and allows you to progress on the path to enlightenment.

For me I had never heard of kundalini and was not expecting it to occur.

One evening I was seated in meditation when I noticed a strange sensation in my lower back.  When I put my attention on it, two balls of energy were released and traveled up either side of my spine to the center of my forehead and there was a flash of light.

The light had a sort of jagged shape on the top resembling an old fashion crown.  In fact, this is also where the idea of a coronation ceremony came from representing the connection between the King and God.  The word crown and coronation come from the word corona meaning “light”.  It is also where Raja or “King Yoga” gets its name.  Raja Yoga is a type of seated meditation.  I also believe that they used the serpent to represent the energy because of the sensation of the energy moving up the back, it is not meant to have any sort of evil connotations.

In the immediate moments after kundalini was released, I did not feel any different, but in the weeks and months to follow, I would experience the world differently and be progressed on the path toward enlightenment more rapidly.

My own spiritual experience was so amazing that I became an author and wrote my first book titled “Northern Awakening: The Evolution of Consciousness”.  The book describes my experiences and how we are all on the same path of spiritual evolution moving collectively towards enlightened consciousness, that is currently being accelerated world-wide.

If you are interested in reading more about our spiritual journey please check out my book Northern Awakening: The Evolution of Consciousness, it is available as an eBook and paperback on Amazon/Kindle.  Check out the link below. 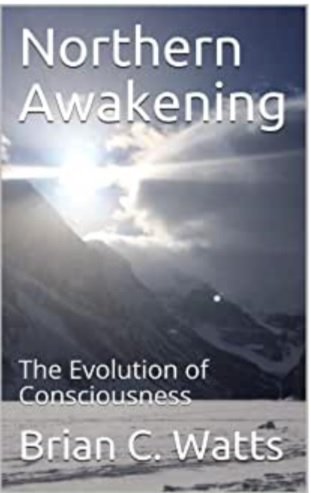