Many people have asked me: Can meditation help with bipolar disorder?

Good news: There are some excellent types of meditation for bipolar disorder that science suggests could help cure the condition.

According to the American Psychiatric Association, Bipolar, formerly called “Manic Depressive”, is a mental health condition with psychological, sociological, and biological aspects. Episodes of mood swings (mania or ‘hypomania” and depression) can make it seem impossible to live a normal life.

However, according to research published in the Journal of Psychiatric Practice, meditative practices can help alleviate the symptoms of the condition and control mood swings. You should note, however, that meditation works best when combined with psychological counselling.

There are different kinds of meditation for bipolar disorders. And the exact benefit you will gain from meditation depends on which of the types of bipolar disorder you suffer from. (Mayo Clinic states that the types are Bipolar I Disorder, Dipolar II Disorder, and Cyclothymic Disorder). Your doctor will help you determine where you fall on the Bipolar Spectrum.

As a meditation teacher, many people have asked me: can meditation cure bipolar disorder? I researched the science and discovered that year on year, more people with bipolar disorder are turning to mindful practices for help. And research shows it could work.

What Are Meditation And Bipolar Disorder?

Bipolar Disorder (Manic Depressive) is a brain disorder that causes unusual shifts in mood, energy, activity levels, and the ability to carry out day-to-day tasks according to the National Institute of Mental Health. People with the condition often fluctuate between mania and depression [READ: Meditation For Depression].

Meditation is a health practise that involves focusing the mind on specific things. There are many different forms of meditation, including Buddhist methods, Daoist methods, contemplation, mantras, mudras, breathing techniques, and guided meditation for bipolar disorder.

Statistics show that 2.6% of the population are manic-depressive. And WebMD notes that it is a much more common problem than most people realise. [2]

Can meditation help bipolar disorder or cure it?

Many people ask me: Can meditation cure bipolar disorder?

I am not a medical healthcare professional, rather a meditation teacher, so it is not my place to answer this question directly. However, there is significant scientific evidence indicating that meditation can help with bipolar disorder and certainly with the symptoms of the condition.

For most people, there are certainly plenty of reasons to try some meditative exercises. However, it is also worth bearing in mind that there are some health risks of meditation, so if you start to feel uncomfortable or unwell when practising, stop. It is best to consult a healthcare professional before you attempt the exercises.

Does it really work?

Science has proven the efficacy of certain types of meditation for bipolar disorder. These meditative practices can alleviate the symptoms of the condition. For instance, by increasing mood stability and reducing episodes and levels of mania and depression.  While meditation can’t cure bipolar disorder, it can certainly make it much easier to cope.

Studies show that one particularly good exercise for manic depression is to use mindfulness-based cognitive behavioural therapy.

Research suggests that practising mindfulness-based cognitive behavioural therapy can lead to an increase in self-control and executive functioning. Plus, it could reduce the behavioural symptoms of the condition. [3]

How Meditation Can Help with Bipolar Disorder

Meditation can help improve mood swings in many ways. For instance, by reducing stress, increasing concentration, and enhancing sleep.

1: Meditation and the bipolar brain

We can use meditation to regulate emotions and moods. Specifically, meditation strengthens the prefrontal cortex. This is the emotional control centre of the brain. It controls depression, mania, and other emotions.

The prefrontal cortex is underactive in people with bipolar disorder. However, meditation increases this activity. The brains of experienced meditators exhibit more thickness, density, and activity in the prefrontal cortex [University of Massachusetts, 2005]. In turn, this reduces stress, anxiety, and depression.

The Amygdala is the number one brain region associated with bipolar disorder. However, research from Harvard neuroscientist Dr. Sara Lazar shows that eight weeks of mindfulness meditation reduces amygdala activity to help reduces stress and reduce the “fight or flight” response.

Meditation also stimulates your whole nervous system. In turn, this causes it to reorganise at a higher rate. Plus, it increases neurogenesis to create new neuron in the brain. This helps to fortify neural pathways and synchronize the right brain and left brain, creating “whole brain synchronization.”

Yes, the benefits of meditation for the bipolar-disorder brain are extraordinary.

In The Tao of Bipolar, C. Alexander Simpkins PhD says: “The mental training that comes from practising meditation increases activation in the parts of the brain that manage emotions and moods.” Patients who use mindfulness as a part of their daily practice show increased levels of inner-peace and fewer episodes of mood swings for many hours after the practice session. [3]

Some of the best types of meditation for bipolar disorder include calming exercises like mindful breathing, which can help to decrease mood swings and improve emotional control. These exercises also increase awareness,. In turn, this helps manic depressives avoid the highs and lows while maintaining a healthy, balanced mental state.

In other words, with meditation, you will experience less of the unnaturally upbeat, euphoria moments, and also less of the feelings of hopelessness, sadness, fatigue and restlessness.

Our mood is significantly affected by lacks of dopamine, GABA, serotonin, endorphins and other brain chemicals. Research [including Harte et al – Biological Psychology Journal] has found that meditation balances brain chemicals like serotonin and endorphins. And this helps bipolar sufferers balance their mood.

Many bipolar disorder medications (SSRIs) are used to increases levels of serotonin according to the University of Montreal.  Serotonin is a signal relayer that is regarded as one of the most pivotal neurotransmitters in bipolar disorder.

Serotonin is needed for the healthy growth of new brains cells. A decline in the growth rate of new brain cells can lead to depression, according to leading Princeton University neuroscientist Dr Barry Jacobs.  Hence the need for medication. However, meditation increases serotonin naturally according to the article ‘Meditation: The Future Medication’ by Dr Avdesh Sharma.

3: Awareness of the mind

When we meditate, we learn to observe thoughts and moods in a calm way. And we learn to detach from those moods, so we are less reactive.

This is true for everyone, not just people with bipolar disorder. As we go throughout the day and encounter various stressors, we start to respond by releasing brain chemicals associated with bipolar disorder. For instance, cortisol. Plus, our heart rate increases. The key to overcoming this is general mindfulness and awareness. When we are mindful, we are less reactive to stressors and to states of mind.

When we meditate, we increase awareness of the various processes of the mind, such as thoughts and emotions. We come to understand that it is normal for our emotions to fluctuate. Once we understand these mental processes, we become less reactive to them. Then, we can take a step back from the emotional rollercoaster and take more control of our moods. This also means less reactivity to suicidal thoughts.

The prefrontal cortex is the control terminal of your brain. Its functions include knowing good from bad, right from wrong, and understanding the consequences of actions. It also organises the structure of thoughts. We can strengthen the prefrontal cortex by practising mindfulness.

NewScientist says, “Mindfulness meditation increases thickness in the prefrontal cortex and parietal lobes, both linked to attention control. In contrast, compassion-based meditation produces increases in the limbic system, which processes emotions, and the anterior insula, which helps bring feelings into conscious awareness.”

Therefore, two of the best meditations for bipolar disorder are mindfulness and compassion-based methods like the Buddhist methods Loving Kindness and Karuna.

Manic depressives who practice meditation have been scientifically observed to have more control of their minds compared to those with the condition who do not meditate. This is largely because of the decrease in episodes of extreme emotions.

4 Types of Meditation That Help with Bipolar Disorder

Always consult a healthcare professional before beginning. This information is for educational purposes only. Meditation should not replace the treatment provided by your mental health professional.

Here are some of the best meditations for bipolar disorder. As well as these techniques, mood journals have been shown to be beneficial.

Seated breathing techniques are usually the best place to start. This is one of the most natural methods to learn. Essentially you sit and focus your mind on your breathing. This slows your mind down and helps to create internal balance and harmony. Hence, it helps regulate the lows and highs of manic depression.

One of the common symptoms of bipolar disorder is that it makes it hard to control your breathing according to BipolarCareGivers.[5] By using breathing exercises, you can take control of your breathing. Then, you will be able to relax when you have experience mania.

Mindfulness is one of the most important of all techniques and one of the easiest. In mindfulness, you focus the mind on the present moment in a non-judgemental fashion. This helps your mind to relax and helps you to control your mood, which is very beneficial for manic depressives.

Scientific research shows that Mindfulness cognitive therapy, a practice created by Jon Kabat Zinn is particularly helpful. It can help to slow-down racing thoughts, reduce the effects of anxious or depressive thoughts, and decrease impulsivity.

One of the best types of meditation for bipolar disorder is Zazen. This is the meditative practice used by the Zen sect of Mahayana Buddhism.

Zen methods are similar to breathing techniques. What makes Zen different is that it uses specific body postures that help us relax.

Zen meditation helps with bipolar disorder because it trains you to focus and to create inner balance. It completely closes you off to external stimuli, which is invaluable for people whose conditions are triggered by external stimuli, such as noises.

This is a gentle, slow technique that is excellent for general relaxation. It is advocated by Zen Master Thich Nhat Hanh.

Think about the last time you went for a long walk and how relaxing it felt. Multiply that by ten. That’s how relaxing zen walking is. Mindful walking is a fantastic way to silence your thoughts. And that’s very helpful for manic depressives. Because the condition can be triggered by racing thoughts, [6] slowing your thoughts down will help.

There are certainly many benefits of meditation for bipolar disorder. However, always make sure that you are comfortable and that it is safe to practice meditative exercises. I urge you to speak to a doctor or mental health professional before trying these techniques. Meditation is not meant to replace your regular treatment, psychotherapy, or medication.

If you would like to learn more about meditation, book an online meditation lesson with me today. 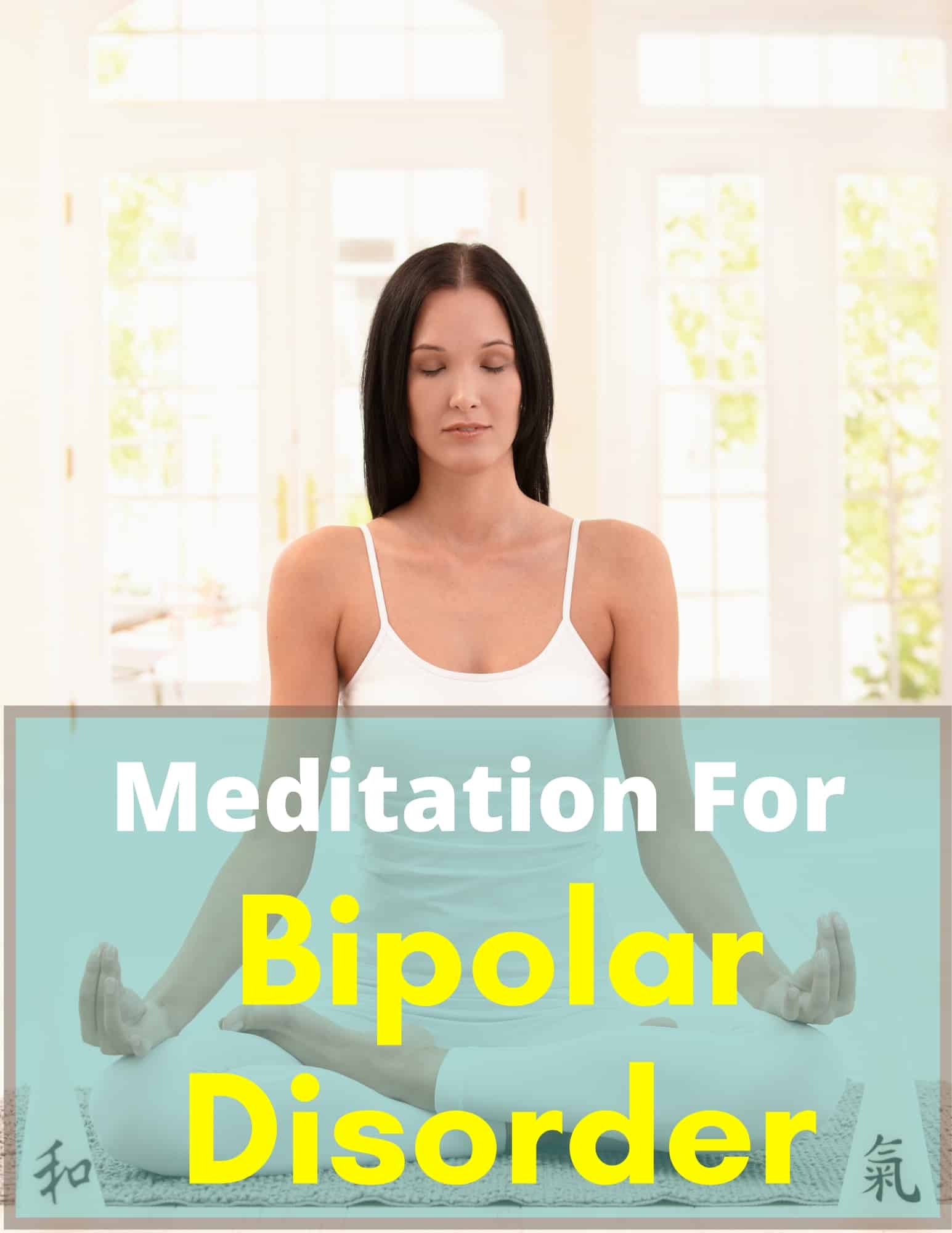